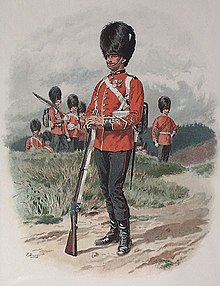 Illustration of a Grenadier Guard, 1889

For most people, mention the word ‘grenadier’ and an image of guardsman in full dress uniform will spring to mind. And this is true not just for people in the UK, but across Europe and in North and South America, similar images will come to mind.

The grenadier has been one of the most distinctive roles in the major infantry forces of the world since the 17th Century.

Originally they were soldiers chosen specifically for the throwing of grenades. As such, they tended to be the strongest and most powerful of the foot soldiers. Over time, their roles broadened and developed to become the elite assault troops in many armies. For example, the Grenadier Guards are the most senior infantry regiment in the British Army

Whether for reasons of appearance or reputation, grenadiers have also tended to become the showpiece troops of their respective armies.

When a regiment was in line formation the grenadiers were always the company which formed on the right flank. In the British Army, when trooping the colour, the “British Grenadiers March” is played no matter which regiment is on the parade ground, as the colour party stands at the right-hand end of the line, and every regiment formerly had a company of grenadiers at the right of their formation.

So why is this military history relevant to Grenadier Firelighters?

Cap Badge of the Grenadier Guards

Grenadiers originally threw small explosive devices called grenades. Today grenades are predominantly explosive and fragmentary. However the original grenades were incendiary, and evidence for this is still visible on the cap badge of the Grenadier Guards in the British Army, which depicts a “grenade fired proper” with seventeen flames emerging from it.

Fire is thus the link to Grenadier Firelighters Ltd and the common feature across its range of products, from electric firelighters to outdoor pizza ovens..

And why were they called grenades? ‘Grenade’ is the French word for a pomegranate. Soldiers commented on the similar shape of early grenades and so the name entered common usage. Apparently early grenades also had round projectile fragments within them that further increased the resemblance to a pomegranate.